The name Cendikiawan Suryaatmadja may not be familiar to people outside the world of education. Diki, his nickname, is fourteen. However, who would have thought that he is now a student at one of Canada’s leading universities?

Diki was awarded a full scholarship by the University of Waterloo in Ontario, Canada majoring in Physics. Fantastic, is not it? Since the results of the 10-year-old Diki Intelligent Quotient (IQ) test date to 189, Einstein (IQ 160), media, both local media and national media, picked up the story of the genius’s journey of achievement. 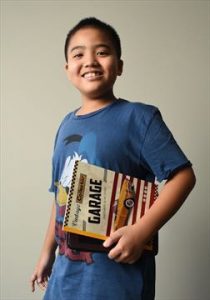 SUN Education as an educational consultant who has helped Diki take care of studying at the University of Waterloo, had the opportunity to interview sushi-loving children and the Breaking Bad television series, a few weeks before Diki left the country. The boy who also speaks fluently in English is fond of studying Economics and likes to paint in his spare time. Diki itself has shown good motor skills since a baby aged four days when he was dried in the morning, he could rotate his own body position.

Like other successful people, Diki also has a role model. In addition to idolizing the mother who inspired him, Diki said he learned a lot from Elon Musk, inventor of Tesla, a leading automotive company. According to him, in addition to having patented many things, Musk is a figure that is also good with the employees and has built a bonafit corporation. Not to forget, Jackie Chan is also a figure that he admired for his humor.

Even though he lives in the home of a Canadian citizen, Mr. Weilian Zhang (according to Canadian Immigration regulations, international students under the age of 18 are considered minor and must have a person in charge), Diki has studied cooking and cycling skills in order to facilitate his life in Maple Leaves State. As a dedicated student, Diki has also prepared himself by learning as much as possible, even up to one week before her departure. Diki hopes his studies can bring him to meet with his friends and his extraordinary education.

Diki believes that in life, we need to continue to learn and absorb information constantly. Diki aims to make Indonesia a better country and build better technology for our country. Diki’s mother, Hannie dropped the option to one of Canada’s best universities and in the world, especially for this field of science. It’s because Mrs. Hannie has met directly with the professors of the Physics field. She believes she can entrust her son’s education in their hands. 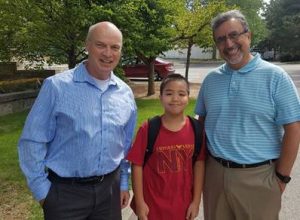 Diki with lecturers at the University of Waterloo. Source: SUN

In closing the interview, Diki shared the values of life, “Think about your action, contemplate it, and just think a lot. Become inspired. Learn from what you have done. Keep learning. Maybe it’s useful, maybe not. Keep absorbing new information and discover. If the information doesn’t bring you advantages, just know it, but don’t follow it. If you don’t understand, contemplate it.”

Want to know more about University of Waterloo which is the choice of Cendikiawan Suryaatmadja? You can visit SUN Course Navigation to know the information about its courses or visit the nearest SUN office to consult more. You can readread and watch more about the explanation here: www.findoutmore.uwaterloo.ca (NWA).