The Skills That The Professional Animator Needs

Education and careers are two important things to achieve dreams. If we can get both, why not? As a young generation today, we are required to be a multi-tasker who is capable of doing various productive things.

This is an inspirational story from Intan Irani, an architect who is also studying Master of Architecture Engineering at Politecnico di Milano, Italy. She has also served as Chairman of the World Student Association (PPI) Italy 2015/2016 and PPI Coordinator Worldwide 2016/2017. At the World Top 250 Prestigious Universities Education Expo that held by SUN Education, she shared her study abroad experience: 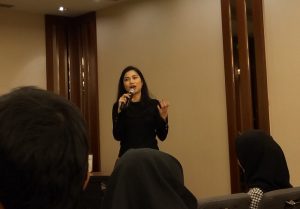 Intan learned that many opportunities were wide open for her while studying abroad. In terms of science, she admitted that the learning science is not limited to the program architect only, but also the parallel sciences of the program, one of which is Psychology.

The most priceless opportunity according to her is having a wide relationship with international and national friends. She obtained this network both from college and organization.

One stroke at the paddle, two and three islands have passed. That proverb illustrates the Intan’s persistence in seizing the opportunity when she studies in Italy. Not just sitting pretty in college, this woman who originates from Bandung also stepped into the world of PPI organization. Initially served as chairman of the Italian PPI in 2015/2016 until Intan finally became the first female PPI World Coordinator in 2016/2017.

During the organization, there were many experiences that she gained especially in expanding the network. She was able to expand her network to the Ministry, Non-Governmental Organizations (NGOs), the community and of course networking with PPI members around the world. From meeting with many people, she is also able to learn to be tolerant, dedicated while also trying to make a contribution to the country.

Behind the happy times, there are also some things she sacrificed, especially the time. One of the challenges she faced at the time was when she held an organizational meeting with the PPI chairman of dozens of countries online. Of course, it is not easy to bring together the opinions of the members from various majors and thoughts, while her college assignment is also waiting for her to be completed. However, she overcame it by dividing the time for how long she would meet and go back to her college assignments. And if the meeting time does not finish at the set time, she will still prioritize her college assignment.

Therefore, Intan emphasized when we decide to go to college while organizing even and working as well, consider first what our initial goal of study abroad.

“When deciding to do part-time while studying and organizing, please measure how effective your contribution will be. Will it interfere with your lectures or not? Look back on your main purpose while studying abroad,” she said.

Being an architect is Intan’s dream since she was a child. Her journey to achieve the dream was not easy and had to overcome many obstacles. When she wanted to study in Italy alone,  she had to convince her parents, because she was the only one studying abroad in her family. Seeing her flexibility to organize, work, and study proved her journey was not easy because she herself didn’t use scholarship option to study abroad. However, determination and consistency is the key to achieving her dream.

In addition to struggling in designing the building, Intan’s current activity is to become a mentor for those who want to study abroad. In addition, she is also writing a book about traveling. Previously, she and the other 39 writers from various countries have published a book entitled Soul Travelers (2017). For the future, Intan aspires to be a person who’s useful for others by being able to share and inspire others.

Intan also gave a message to anyone who wants to study abroad.

“First, you have to be consistent. If you have a big dream, make it. Do not give up quickly. Document preparation should be done correctly. Decide which majors and universities are right for you. Be consistent and self-disciplined to achieve those goals. “